A great article on the UAW organizing drive at Nissan in Mississippi.

Labor South: UAW vs. Nissan in Mississippi: Operation Dixie Revised? An in-depth look
Posted by streetheat at 9:58 AM No comments:

I have to thank Stephen Lerner because I am stealing the title of this post from this speech of his given last year:

This is the short version, you can watch the full version here. I chose the title because regardless of how much I understand that changing the labor movement is a titanic task nowhere near as easy as many seem to imply, I deeply feel that there is a disconnect between the state of the labor movement, the challenges we face, and what we as a movement do on a daily basis to achieve these goals, grow and build power for working people.

I attended one of the many labor sponsored banquets not to long ago. While I often find most labor's gatherings dry and mundane, I attend them because it is an opportunity to network and connect with leaders of our movement and to show my unwavering support for our movement at one of its few public events in my city.

Most of the speakers were what I considered to be fairly traditional as were the topics, the 2012 elections, political attacks on our movement, fighting for good contracts, and honoring the storied history of our movement's forefathers. Many of our key politcal allies attended and were recoginized. Drinks were had and fun (or something resembling it) was had by all.

At the end of the dinner, I came to the realization there was huge disconnect between events like this and the reality of the fact that we are actually facing the destruction of our movement.

I am just as guilty as the next person of being part of that disconnect. Intellectually understanding the depth of our crisis and taking action that corresponds to that depth requires having the shirtail to move the necessary changes but more importantly the political will to take the necessary action. The issue for most of us that the process of overcoming lethargy is a daunting thing to tackle and building intertia is harder than it looks.

Most of our time is spent doing what the labor movement needs to have done to exist and protect what members we do have. We negotiate contracts, we represent workers in grievance hearing, arbitrations and panels. These are the main things that workers organize to obtain, ie. to improve their working conditions, to have better wages and benefits, to have these gains "put into writing" in a legally binding agreement, and to have that agreement be enforced by their union.

For many of us, we give everything we have everyday and it is nowhere near enough. Local and regional officers often percieve their organizations as "doing all they can" and often are strapped for resources themselves.

The tendency to "circle the wagons" keep our heads low and hope the assault on labor will "blow over" after Obama wins a second term is strong.

Most in the upper echelons of the various unions do indeed seem to understand the crisis and also seem to have some idea of what it will take to overcome it.The national AFL-CIO has some new itiatives such as the creation of "Workers Voice" a "superpac" that will serve as an independent voice for labor in supporting pro-labor candidates and the Workers Stand for America Rally next week that is meant to role out a campaign for a "second bill of rights".

Both of these initiatives give substance to the notion that labor must redirect resources more towards independent activity rather than sinking resources into the national Democratic Party structure. The justification for this redirection of resources was underscored by DNC Chair Debbie Wasserman Schultz's comment that the struggle over collective bargaining in Wisconsin would "have no impact on the November election".

Similar to the National AFL, a good number of International unions affiliated to both the AFL and Change to Win have adopted varying degrees of restructuring, directing resources more towards organizing and a more independent approach to electoral politics for this election season. Unfortunately, in every instance the extentof these changes has been either exclusively contained in the International unions or is spotty among regional union structures 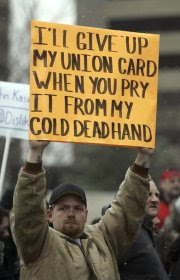 The biggest obstacle remains in local and regional structures, where the policies adopted and moved by International leaders trickles down in a very inconsistent way.

The ability build a grassroots movement of working people rests with politically revitalizing the local and regional structures of our various internationals.Mainly because those are the structures that have the most direct contact with union members.

The challenges of doing this are huge. While on the one hand just about every labor leader in the U.S. would call labor's current state as standing on the precipice, the ability to challenge deeply entrenched norms and structures that impede growth and our abilty to build power remains elusive.

This is where the notion of "marrying our actions with our rhetoric" must occur.

Abandoning traditional collective bargaining, and transforming our various unions into movements explicitly geared towards the fight for power is not realistic in the near term. Saying that, we need a sense of urgency in how we frame the state of our movements and the corresponding actions that we should be asking of ourselves, our coworkers and the members we serve.

We are in a crisis folks, let's act like it.
Posted by streetheat at 5:02 PM No comments: