Ok, so I'm a bit late. I spent most of my Labor Day celebrating my son's birthday and fighting the urge to think about what to write about not only today but the past few weeks and the next few months to come.

So much of our future hangs in the balance it is difficult not to offer up a set of opinions of what I think we should be doing to reverse the decline of unions and thus reverse the decline in wages, benefits and working conditions for millions of American workers. Literally dozens of Newspapers, Blogs, and more than a few TV shows today highlighted the fact that unions are singularly responsible for the creation of the American middle-class and with the weakening of unions that same middle-class living standard is disappearing.

It is always good to hear our leaders state in so many different ways that we are going to fight like hell to win this years election. Regardless of anyone's opinion of President Obama's record on delivering on his commitments to labor, Mitt Romney, Paul Ryan, and the cabal of reactionary operatives like Karl Rove and Grover Norquist represent an existential threat to unions. They are committed to waging war on our ability to fight for a fair economy that works for all of us. 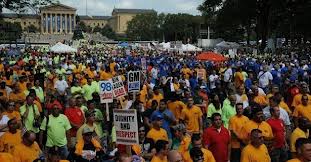 A key question in this years election will be whether labor's increased emphasis on diverting resources away from Democratic Party structures toward membership mobilization and messaging as well as direct contact with non-union voters will be sufficiently robust to counter the tsunami of corporate money that will bombard voters with billions of dollars in negative advertising.

The spike in corporate money entering elections and the corresponding uptick in right-wing independent expenditures in 2010 caught labor by surprise. That unexpected infusion of corporate cash along with substantial cynicism among union and progressive voters (the "enthusiasm gap") led to the shellacking we took in 2010. After much hand wringing and exhaustive analysis labor has hopefully developed a ground game that can play a key role in delivering a defeat to Mitt Romney.

I accept that most discussion between now and Nov. 6th will be focused on beating our blood enemies. I don't often use the term "our only hope", but this comes about as close as you get to a life or death election for labor.

But aside from the fiery speeches about kicking Mr 1%'s ass, Labor Day allows us to also take a few stabs at thinking about strategies for not only our immediate survival but also turning our current defensive posture into one of offense.Labor Day is a day to think big and dig deep. It is a day to look back in reverence and to look forward with renewed determination. 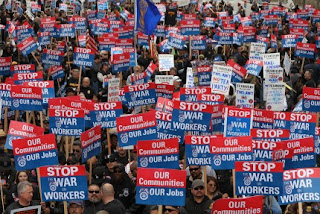 Thinking beyond Nov.6 is critical. If Obama wins or loses, there are dozens of state houses and Governors now in the hands of people committed to our destruction who will open up legislative sessions next year with a whole new set of attacks on workers.

The same quandary over growth and renewed power for unions in America continues to elude us. Commentary from scores of radical pundits notwithstanding, serious and deliberate action is required to begin retooling the labor movement to meet the challenges ahead: 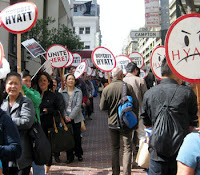 Finally we have to renew the spirit of discussion that can help us flesh out the details. I realize that what I am writing here is just the opinion of one union staffer who has a very limited ability to implement any of what I am writing about. But I also know that many labor leaders I speak with grapple with these exact questions. The main obstacle that seems to be present is a clear method of overcoming the various obstacles both human and material to rebuilding our movement. Happy Labor Day.