Another dispatch from the fight in Mississippi.

I definitely cannot be counted on to deliver up to the minute analysis of huge events in the labor movement. If I counted that as one of my objectives I would be a dismal failure.

Since my last post, we have witnessed a series of events that can only be seen as vindication of those of us who have rejected the notion that the death of the labor movement is a foregone conclusion. Also vindicated is the perspective that labor must begin strategically targeting and organizing in such a way that can shift the balance of power in whole markets in order to win.

It would seem there are more than a few in labor who are determined to turn things around. They are proving the crisis of labor is in fact deep, but not insurmountable.

The Chicago teachers strike pitted the third largest teachers union in the country, the 25,000 member Chicago Teachers Union (CTU)  against Barack Obama's former chief of staff, Chicago Mayor Rahm Emanual. The stage was set for a confrontation between CTU and their newly elected militant leadership and Chicago's Democratic Party establishment. Known as a ruthless political opponent, Emanuel was outmaneuvered by bold and aggressive organizing that framed the issue successfully and truthfully as a battle to save public education for Chicago's children. The CTU was able to maintain public support throughout the strike and were both aggressive enough to win substantial gains as well as pragmatic and saavy enough not wage an open ended strike, resulting in making concrete improvements both in conditions for Chicago's students as well as working conditions for the Teachers. By rejecting the pro austerity narrative and controlling the framing of the struggle as one for justice and fairness the Teachers defeated attempts to isolate them. All in all, a solid win in an age where strikes are seldom planned and even more seldom won.

The Chicago teachers raised our spirits, got our blood pumping and gave the "screw the unions" wing of the Democratic Party's poster boy a bloody nose. 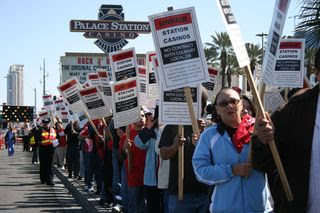 Unite Here's campaign to organize Las Vegas's third largest private employer Station Casinos received a recent boost when the NLRB denied the Company's appeal of an administrative judges ruling finding Station guilty of 87 Unfair Labor Practices. The violations were so egregious that the NLRB found an additional two charges of Station Casinos violating the workers' right to organize free of intimidation. The ruling came after a dramatic public hunger strike by workers demanding a fair process for an election. 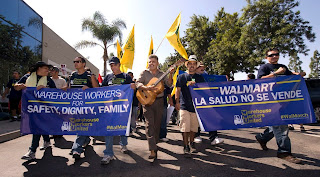 Groups of warehouse workers who work for Walmart contractors  struck in California's Inland Empire led by Warehouse Workers United and in the Chicago suburbs led by Warehouse Workers for Justice. The Strikers in California organized a "Walmarch" to LA to deliver their demands and the Strikers in Chicago shut down their warehouse with a mass demonstration that culminated in civil disobedience. 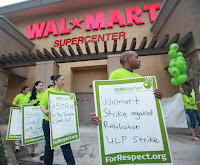 Very soon thereafter Wal-Mart store employees (Associates in Wal-Mart Speak) struck over a dozen stores around the country led by OURWalMart an organization led by Wal-Mart Associates.
The strikes culminated with Warehouse workers from Chicago and California linking up with OURWalmart strikers in Walmart's hometown of Bentonville, Arkansas and where there were joint actions at the first Walmart store and Walmart's headquarters.

Both the warehouse and store Associate strikes "changed the game" and were remarkable in a number of ways:

OURWalmart has announced that they will strike again on Black Friday to protest Walmart's acts of intimidation and retaliation against workers who are organizing for change in their workplace. Making Change at Walmart is organizing solidarity with the workers.  This could well be a watershed moment in contemporary labor history and if there ever was a moment to think in a dynamic way about how we can work along side these incredibly brave workers in their struggle this is it. At a bare minimum, you can sponsor a worker here.

All of these struggles illustrated the validity of approaches that include boldness, strategic planning, messaging and actions designed to draw public sympathy by emphasizing basic principles of fairness, and organizing that targets building density and power in entire industries and markets.

Maximizing how the rest of the labor movement learns the positive lessons of the recent actions as well as continues to look to using the same guiding principles in our own efforts at building power for workers.


I would be remiss if I did not touch on the 2012 election. With no exaggeration whatsoever, we face the starkest choice of any election in my lifetime. Mitt Romney poses a mortal threat to American working families. There is no debate that he intends to take measures designed to mortally cripple the American labor movement and roll back every gain of the new Deal.

In addition to supporting candidates, Labor is faced with a number of critical ballot initiatives around the country. From fighting an aggressive attempts to politically neuter labor like Proposition 32 in California to the ambitious campaign to enshrine collective bargaining into Michigan's constitution through Prop 2. 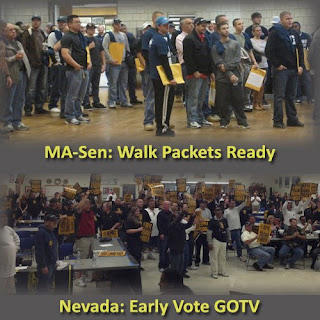 Labor has responded to this threat with the largest independent field mobilization in it's history. Banking on our capacity to mobilize and the newfound ability to directly communicate to the public through community affiliates like Working America or independent committees like Workers Voice , tens of thousands of volunteers and staff have supplemented the massive ground campaign of the Obama campaign and criticial Senate, House, and Gubenatorial races around the country.

All of this is in addition to the traditional member to member campaigns of direct contact at worksites and directly volunteering for campaigns in battleground states. Labor's campaign is now being credited with providing the key firewall in the key swingstate Ohio. When all is said and done, there will be no doubt of labor's key role in every major victory in 2012. 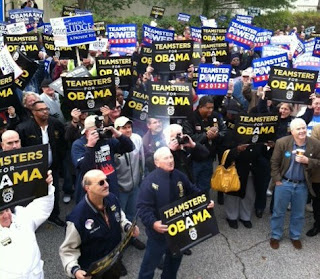 This is no time to be agnostic on elections nor is it a time to turn our backs on our own critical struggles in favor of electoral work. For the first time in our history it looks like that we might actually pull both off.

I am positively thrilled. How about you?

Now back to the trenches.

Posted by streetheat at 3:42 PM No comments: