A Cloward-Piven Strategy for Labor? 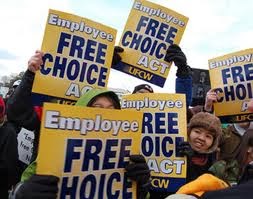 Since the passage of the Taft-Hartley Act, a key question facing the U.S labor movement has been how to pass pro-worker legislation that expands on workers' right to organize and bargain collectively. From the post-PATCO effort to ban permanent replacements to the more recent effort to pass the Employee Free Choice Act, labor legislative efforts have been stymied by intransigent opponents and reliance on less than reliable allies, and of course too few reliable allies.

For whatever reason, these campaigns at legislative reforms have always taken a more traditional path than other more confrontational models utilized historically by both the early labor movement that successfully helped pass the National Labor Relations Act and other progressive constituencies such as the civil rights movement in the 60's and the contemporary immigrant rights movement. This often means traditional lobbying supplemented by sporadic press conferences, testimonials by workers to elected officials and some attempt at getting the legislation to gain traction in the media.

While much of labor has languished in this purgatory, movements basing their ability to make change on asserting ones existing rights, confrontational and dramatic tactics, and a willingness to challenge hesitant allies have gained steam. This trend offers a glimpse of what a transformative workers movement that could win major pro-worker reforms could look like. 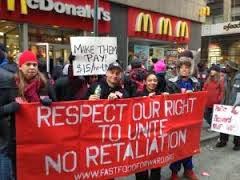 A few bright spots in the labor movement have decided on a strategy of launching campaigns where groups of workers at strategically important companies or industries assert the right to protected collective activity under section 7 of the National Labor Relations Act and use that activity to win concessions from an employer prior to winning a collective bargaining agreement. The overall strategy being the building of a movement of workers that will eventually gain majority support and demand recognition of one of the unions supporting the workers' efforts. 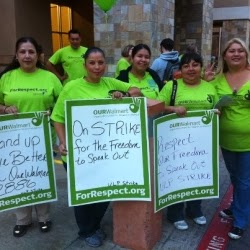 While these tactics have not led in the short term to the explosive growth that is needed to turn labor's fortunes around, they have been enormously successful. While the rest of the labor movement is contemplating how to remain relevant to the members they represent and the industries they work in, the innovative strategies being employed by Walmart workers, federal contractors and workers in the fast food industry are grabbing headlines, stirring up debate, and most of all ...winning.

While organizing workers is different from creating new labor law in America, the strategy of social disruption, if
expanded, might very well point the way for labor to "upset the table" of American labor law and create a crisis out of which a new American labor law might be born. 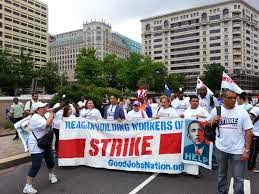 The theory espoused in what has been popularly referred to as the "Cloward-Piven Strategy" puts forward a model of winning reforms by creating a "crisis" (in their case, in the social welfare system) by the subjects asserting their rights under current law and taking actions that utilize these rights to demand reforms as well as make concrete gains that improve current conditions. The premise of the strategy is that most systems are not designed for people to seek the benefits or rights that they are entitled to by law in any sort of concerted manner, so that when they do so in large enough numbers, the legal structures in place begin to "short circuit" and force changes that go beyond existing law.

This theory is not based on a pie in the sky belief, but rather the historic truth of social movements, that people organized and moved into action to assert demands to existing rights in a broad enough way will more times than not win an expansion of said rights. This is a truth exemplified in both the 1930's labor movement that led to the NLRA and the Civil Rights Movement which secured the Voting Rights Act and Civil Rights Act. 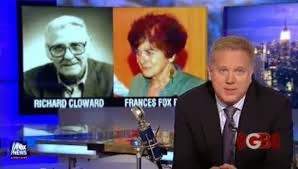 What if that same strategy was fully established into a comprehensive campaign, anchored by the labor movement, to build a movement of workers along those same lines? These workers would be linked to sponsoring unions through organizations designed to facilitate concerted activity actions, tailored to specific industries, companies or even regions, using section 7 of the NLRA as a basis for action.

Anyone who knows the current state of the National Labor Relations Board understands that even a moderate level of concerted activity would provoke illegal actions of retaliation from employers to which the Board would have to react. It is very likely that any consistent level of activity would create a crisis of labor relations in this country due to the inability of the Labor Board to successfully adjudicate cases, as well as create a sense on the part of corporate America that they must make concessions in order to get the system back to functioning along normal lines. 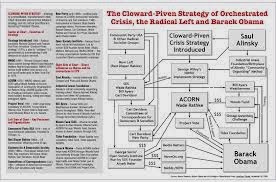 There is good reason that the entire far-right conspiracy theory "industry" has put so much effort into vilifying the strategy advocated by Cloward and Piven. Primarily, they find it useful to tie a "radical" theory of social change to President Obama, but also they target it because it expresses principles that have enabled earlier movements to expand to the point they destabilized American capitalism. The notion of using a method of movement building that at it's core states unequivocally "these are our demands and until you grant them we will exercise every right we have under the law to achieve them" terrifies our enemies for good reason.

Before i am accused of daydreaming of a workers uprising (which i am guilty of by the way), I will point out that the fundamental laws of organizing still apply to the American worker. The efforts by the fast-food workers, OURWalmart, and Good Jobs Nation have shown that it is possible to fight and win using this approach to movement building and that there is at least a conscious minority of American workers ready to take such actions. The real question now is whether we are willing to "put it all on the table" and dig deep for the political will to create a crisis for corporate America that can rebuild the power of the labor movement and extract the concessions that American workers need to survive and prosper?
Posted by streetheat at 3:10 PM No comments: