"Right to Work" : A Body Blow, Not a Death Blow 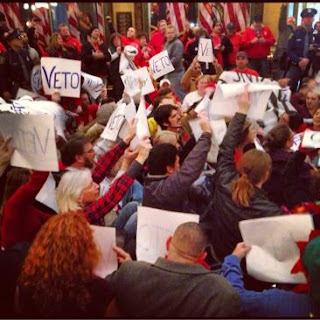 The signing of "right to work for less" in Michigan is another stark reminder to us all how deep the crisis of labor is. As if we needed another. The fact that the supporters of "right to work" could garner enough votes to pass such a bill in Michigan underscores the determination of our enemies and the extent to which the decline of labor density has weakened labor's ability to fend off attacks, even in our strongholds.

Right to work will not kill the labor movement in Michigan. If enacted, it will however weaken it substantially. This makes keeping up pressure in the streets, courts and all other points possible to defeat its implementation essential. There is also still time to mitigate and undo the damage done through a variety of legal and legislative strategies. While the fight is far from ending in Michigan, we must look soberly at our priorities as a movement.

Going forward with the effort to beat back and repeal "right to work" is both necessary and makes sense. The same can be said for the other states who have recently passed or partially passed attacks on the labor movement. In many cases these states will see many of the Republicans who snuck into office in 2010 under false pretenses kicked to the curb in 2014. The energy created by the movements against the attacks on labor and working people represents a movement that has awoken from it's slumber and this new energy will lead to our taking the offensive both politically and in organizing if our leaderships take advantage of it.

That being said, the rest of the states that have been living under "right to work" will continue to do so until we reverse our decline and begin to grow qualitatively. In those states growth and infrastructure building must take priority over possible efforts to repeal Right to work or enacting "fair share" legislation. This is not to say that we should not take advantage of any opportunity to do either should it present itself (a remote possibility), but prioritizing it over growing our movement, activating our members, and strengthening our organization would be a mistake at this moment. On the other hand, so not to be confused with the more syndicalist abstentionists out there, to what ever extent possible we have to for survival's sake continue to resist legislative attacks against labor wherever they are.

I live in a right to work state. Anyone who says right to work is an acceptable condition to work under has never lived the experience, at least in terms of trying to build and grow organization.

Every day some portion is spent contemplating how to maintain membership levels in my union. We represent several large groups of low-wage members both newly organized and as components of larger groups of better paid members. These groups of members have an extremely high turnover rate, so engaging with them immediately upon being hired is always a priority. The right to meet and do a union presentation is always a priority of every contract that we negotiate. Freeloaders are subjected to varying degrees of 100% legal social pressure from their coworkers of varying degrees depending on the level of union organization at that worksite. This additional burden of maintaining our membership is a constant financial drain on our union valuable hours of staff time are consumed daily by this area of activity.

Where turnover is lower the level of membership is always higher. Our local union's worksites as well as other unions that are more stable provide the core of our states union membership. Not coincidentally these industries usually represent those area of the private sector where unions used to hold sway nationally. It also reflects the fact that members in these types of bargaining units have a greater understanding of how their membership levels reflect their relative strength to their employer and how that correlates with contract gains.

All this being said unions have survived for decades in right to work states and will continue to do so insofar as we continue to survive precariously on a national level. A strategy for growth and strategic development of capacity in right to work states must be at the center of any discussion of labor revitalization. Ideally this would include creating special funds that pool resources from the union locals at the "bookends" of our country where we are strongest to be channeled into strengthening our structures in the south or creating structures where none exist.

Labor must make an investment in the south and right to work states. It is no coincidence that our greatest enemies are voted into positions of power from the south and RTW states.

In states where the "war on workers" has been waged the most we must do everything we can to roll back these attacks. At the same time as we fighting to protect our flanks in this war we must work to internalize the mistakes we have made that got us here in the first place. The constant attempts to blame the contemporary leaders of unions where mistakes have been made for decades for this situation serves no one. It is up to all of us now to do the hard work of rebuilding and the best way to do that is a robust and sober discussion at all levels of our movement that dispenses with preconceived notions and opens up to winning strategies. It behooves our leaders to listen.


Posted by streetheat at 8:37 PM No comments:

A "Tahrir moment" in Michigan?

Thursday the Michigan State House and Senate passed "Right to Work " legislation despite howls of protest over procedure and a massive last minute mobilization by Michigan labor. Since the House and Senate passed different versions the differences must be reconciled and voted on be both houses. If were hiding under a rock yesterday here is the quick and dirty from Working America's blog Main Street.

Passing "Right to Work" for less legislation in Michigan is further confirmation that the "War on Workers" that started after the 2010 election did not end  with the re-election of President Obama. Those ideologically anti-worker majority legislatures and Governors elected in 2010 that remained in place after this election cycle still hold in their hands the same plans ALEC handed them two years ago. Those chambers that have shifted back toward being less hostile to workers this election are busy ramming through their agenda in the remaining "lame duck" session.

Labor now faces another attempt to cut us off at the knees. Already the cries of "We'll remember in November!" ring out from the ranks of our members packing the Michigan Capitol.There are five days before another vote can be taken on "Right to Work" for less.

Five days is a lifetime in movement politics.

Where we have failed to defeat these attacks generally it has been because our enemies had generally been more determined than us to win. They have been willing to lie, cheat, steal, and suppress to achieve their agenda. This was true in Wisconsin , Indiana, and Florida and it is true today. Legal challenges notwithstanding, they beat us because they were willing to impose their will on us no matter the cost.

They DID NOT beat us because we didn't mobilize. Incredible mobilizations were carried out in every state where we were attacked, most dramatically in Wisconsin where the capitol was occupied by thousands for a few weeks. We fought hard. But when push came to shove we as a movement choked when the question was called whether we would take the fight to the next level. Obviously some will disagree with me on this assessment, but the fact remains that labor was not only politically defeated we were also outmaneuvered by our opponent's intransigence and political will.

Things are different now. We have contemporary examples of how people can take action to force the hands of those in power and win despite the odds not being in our favor.

Not long after the fights in Ohio and Wisconsin, the people of the Middle East rose up in massive mobilizations against corrupt, authoritarian regimes. In Egypt this culminated in the occupation of Tahrir square in Cairo where sustained demonstrations brought down the Mubarak regime.

Beginning with Occupy Wall Street, occupations of public spread to numerous cities in the U.S. emulating not only Tahrir Square but also the movements for Democracy and against corporate power in countries around the world. The images of these movements are now etched into American consciousness and direct action now carries a legitimacy that would not have been possible before.

Obviously a titanic amount of mobilization will be required to stop this bill. Mobilizing sufficient social power to put a halt to the legislative process is a tall order, but not impossible.Thankfully plans for such actions seem to be taking place this weekend.
The number one thing that MUST happen is for people to stop saying we will wait "four more years" to repeal this bill. Winning requires actually believing in your ability to win. The people of Michigan CAN win this fight. My thoughts and prayers are with them as they plan for the fight of their lives.


Posted by streetheat at 4:22 PM No comments: