From Josh Eidelson at Salon:


"At 6:30 this morning, New York City fast food workers walked off the job, launching a rare strike against a nearly union-free industry. Organizers expect workers at dozens of stores to join the one-day strike, a bold challenge to an industry whose low wages, limited hours and precarious employment typify a growing portion of the U.S. economy."

Sarah Jaffe had this to say in The Atlantic:

"For so long, a lot of labor and other folks have avoided these industries because they thought they were too low wage, too hard to organize, and now our economy has become an economy of mostly low wage service jobs," Westin said. "It was the same thing when they were organizing factories in the early 1900s. They organized those factories and lifted an entire segment of the population into the middle class. This could happen here. We could lift an entire segment of the US population out of poverty and into the middle class."

"And this is the common thematic element of the new organizational efforts we’re seeing take place in the service industries. Both the Walmart strikes and the New York City fast food strikes taking place are very demonstrative. That is to say, they are attempting to expose a contradiction in an industry (very successful companies who compensate workers very minimally) with a very visible, highly publicized action. This is a great way to create a discussion, but the question remains after that discussion begins: what type of organizations, unions, and institutions are we to build which can maintain the energy we’ve produced through activism. What receives this infrastructure being built by organizers? How are resources built, and more importantly, how are victories produced in which workers are not only politically better off, but economically better off?"

Posted by streetheat at 6:52 AM No comments:

I participated in the Black Friday action. No workers struck at my location but dozens of supporters held a spirited and effective action that a) received really good media attention that highlighted the demands of the Wal-Mart associates and b) successfully rattled the cage of store management. All in all a fun day. Nationally the picture was much more varied from strikes with dozens of strikers and hundreds of supporters to a single supporter or striker (yes one striker) picketing a store by themselves. I wanted to share some thoughts on the implications of the Black Friday strike and protests.


The degree to which the strikers and the supporters were portrayed as leading a just fight by many media outlets was a critical blow to anti-worker PR in general.
There I said it. Let me have it.

Posted by streetheat at 7:32 PM No comments:

Will Black Friday be a Tipping Point? 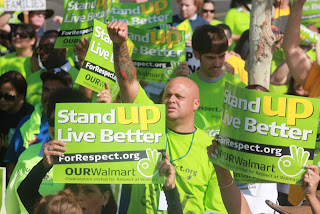 Tomorrow, "Black Friday", Walmart Associates across the country will be walking off the job to stand up for their right to organize and to protest management retaliating against their members for standing up. No one really knows exactly how many people will walk off the job during the busiest shopping day of the year, but whatever the number, it is clear that Black Friday has brought the issues the workers face to the forefront of the public consciousness. In that alone they have one victory in the bank.

In the past Walmart was able to tightly control the narrative told by most of the media. That is not so anymore. OURWalmart and their allies have skillfully put Walmart on the defensive by frontlining the members of OURWalmart rather than staff people as guests on talkshows and in the media and by making sure the workers were able to tell their compelling stories through social media. Labor journalist Josh Eidelson has done a fantastic job chronicling the strikes on his new blog at The Nation. 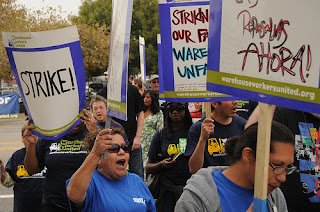 The strike wave a few weeks ago never really ended. Strikes became more sporadic but continued at stores around the country. Warehouse Workers United called a new strike early last week over management retaliation against organizers. These continuing actions have kept the spotlight on the struggle facing Walmart associates who are raising quite reasonable demands. The fact that the strikes are "Unfair Labor Practice" strikes protects the workers from permanent replacement and any retaliation by Walmart simply creates the basis for valid claims of illegal activity by the Company.

My metric for success is not whether a single Walmart is shut down tonight or tomorrow. I will judge the Black Friday strike by whether the labor movement as a whole comes out of this with with a renewed sense of our own ability to be bold, think big, and to take the fight to the enemy. The question for us all is could this be the "tipping point" that both validates a new model of organizing large service sector employers and leads to a new upsurge in organizing and worker militancy? I can't wait to find out.

So get your ass to a Walmart tomorrow and lets make some history.

If you can't get your ass to a Walmart tomorrow(actually even if you do), you can sponsor a striker HERE.
Posted by streetheat at 6:51 PM No comments: