Crosspost - One Big Union: Why community engagement is needed for labor victories in the South.

Today, labor faces both threats and opportunities in the South. If union density (which is at an all-time low in the South) is to grow, the way forward has to be community involvement and mobilization. It has been about this since the beginning:

“In the 1944 Florida election, the Miami Citizen noted that the principal backers of the bill ‘come entirely from the backward, low-wage sections of the state, where the lumber and turpentine interests rule their workers like barons of old, and laborers receive
little or nothing in groves and on the farms.’” (Shermer 2009)

One Big Union: Why community engagement is needed for labor victories in the South.
Posted by streetheat at 1:43 PM No comments:

Sharecropping on Wheels - Working In These Times

Sarah Jaffe has written a fantastic piece on Teamsters and Change to Win organizing Port Truckers in Savannah. Georgia

Sharecropping on Wheels - Working In These Times

Posted by streetheat at 2:01 PM No comments:

The South: Labor's Elephant in the Room #1ufuture

While encouraging, the recent uptick in discussions regarding the future of the labor movement will be limited in its impact unless the strategic nature of the U.S. south is included in the exchange.

It is somewhat mystifying that while acknowledging the urgency of labor to address its shortcomings, the critical role that the U.S. south plays in stymieing labor's ascendancy has received little to no attention. More concerning is the fact that the south's centrality to labor's resurgence and ultimate survival is not even acknowledged in this increasingly vigorous discussion.

The combination of  anti-worker laws, repression against people of color and reactionary politics has allowed the enemies of labor to define an entire geographic area as a bulwark against movements for social justice. The south provides the critical majority of electeds who have held the line against pro-worker reforms (along with most other progressive legislation) and its laws have provided a template for laws passed in the "war on workers" in northern states like Wisconsin, Ohio, Michigan and New Hampshire.

The low regulation, low union density south continues to attract major corporate investment and the south's role in the global supply chain continues to grow. A majority of the largest ports on the eastern seaboard are located in southern right to work states and the world's largest airport is in Atlanta, Georgia which has steadily increased it's role as a major global air freight hub.

These and other facts are well known to every person contemplating labor's future. One can only speculate for the reason for it's lack of being included in the current discourse. It might be easier for some to use this as a political club with which to further illustrate the need for one of the many silver bullets suggested or to argue for the replacement of many of the various union leaderships. The more responsible path would be for those of us in labor who see the absolute necessity of labor's engagement in a discussion of the south to highlight it and demand its particular circumstances be taken into account with sufficient seriousness wherever we engage in discussions of organizing, politics and union structure within the current debate.

For the most part is is easy to see why labor continues its historic weakness in southern states. Most unions have responded to the lower memberships among their affiliated southern structures with a "you're on your own" approach to organizing, contract negotiations and political action. The logical outcome of this approach is unions that are structurally weak remain weak, the union density of their respective jurisdictions remains low and workers remain unorganized, and the reactionary, anti-union structures and laws remain in place to reinforce and maintain the status quo.
This does not mean victories don't happen in the south. UFCW's decades long organizing campaign that was ultimately victorious at Smithfield, Teamster organizing of school bus and sanitation workers and at UPS Freight (formerly overnite), UAW's renewed campaigns among foreign southern based automaker transplants like Nissan are bright spots where it is shown that successful organizing is
possible in the south. The Struggle of the Coalition of Immokolee Workers, the recently initiated Teamster/Change to Win campaign to organize port truckers in Savannah, Georgia, and various campaigns among southern public sector workers who lack the right to collectively bargain show the possibility of campaigns directed at workers who are misclassified and excluded from traditional collective bargaining.  Unfortunately these are exceptions, and campaigns like these would have to be replicated on a massive scale for labor to turn around its fortunes much less reverse its decline.

Seriously taking on the challenge that the south represents requires that labor, during its deliberation over its future, incorporate a strategy that recognizes the reality that labor cannot win without winning in the south.

The question of resources  will obviously dominate any discussion. There should be no argument that increased resources should be deployed to compensate for southern labor's weakened state. How labor effectively deploys any increased resources will determine whether there is a break with failed strategies of the past or an embracing of effective ones.

Labors textbook approach to bolstering resources in to fly in organizers and other staff employed by the international union or, given sufficient gravity additional resources and staff borrowed from other local unions or other affiliated bodies, for the duration of a campaign and then move them on to the next campaign. While it will always be necessary to supplement staff and resources at key moments in a campaign the blitz model is problematic in that is does nothing to structurally strengthen unions in low density areas. 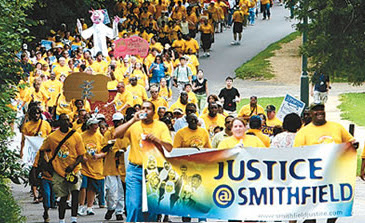 An alternative approach would be the pooling of resources to allow unions in the south to staff up as needed to increase capacity and stabilize their organizational existence. Some unions have created funds that are contributed to by locals in high union density areas to subsidize unions with less resources to increase their capacity to organize.  Grants provided to local unions or affiliated bodies to underwrite large scale campaigns and increase staff and capacity in other areas have been used in some unions, increasing the size, scale and availability of such grants would be necessary to meet current needs.

Shifting resources to win in the south necessarily means taking funds from other projects and revenue sources. In many cases this could create an internal struggle over the allocation of funds.There is no doubt feathers will be ruffled and fiefdoms will be threatened, but making a choice between labor's survival and comforting the sense of official entitlement will require political will that hopefully can be summoned.

Increased resources will not lead to winning campaigns without significant deployment of education and training resources that can assist local leaders in developing effective strategic plans that can lead to growth and organizational strength. Examples of best practices as well as the assistance in the development of regionally specific strategies that are tailored to the reality of the south must be made available and local leaders could be offered assistance in implementation. 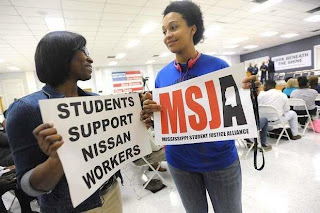 As in all cases there will be local officials who will be hostile to any attempt to shift out of the present arrangement. Many have learned to exist in a weakened state (see "Right to Work: A Body Blow not a Death Blow") and some have carved out areas where they already exercise some degree of power. Every union has its own internal norms of the degree of local autonomy enjoyed by its affiliated bodies and will have to determine the degree to which new organizational norms might or can be imposed from without. It is pretty clear however that the current reality of laissez-faire federalism in many unions is at least part of the current problem. Coming to terms with the fact that aspects of local autonomy may need to be reconsidered in order to implement a broad based and effective approach will be essential.

Key to building public support is to organize among the overwhelming majority of working people in the south who have yet to join a union. Working America has shown great promise in its ability to conduct grassroots organizing and political mobilization of non-union working families. A broad campaign among non union workers in southern states educating them on working families issues would be of great benefit. One encouraging sign is Working America's recent announcement that it will expand its operations into all fifty states within five years. When the decision is made to make the move into the southern states hopefully it will be done with the need for supplemental consideration of the southern reality.

Putting the discussion of organizing the south at the center of the current discussion on the future of the labor movement would open up the possibility of actually building power in corporate America's stronghold and undermining their ability to maintain a stranglehold on our democracy. We ignore it at our peril.